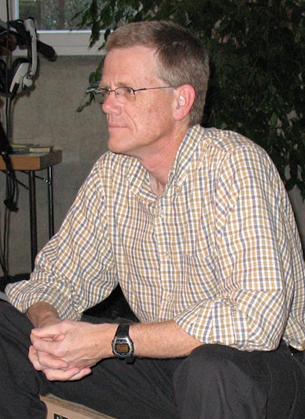 Richard (Chip) Kirk serves as an international speaker, trainer, motivator, evangelist, and missionary with Operation Mobilization (OM), USA. Chip’s ministry focuses on spiritual renewal that subsequently leads to missions. “I believe,” he says, “that the greatest hindrance to world missions and evangelism today is a lack of spiritual reality and authenticity in the lives of Christians, which leads to confusion, disillusionment, and complacency. I also believe that the greatest motivation for evangelism and world missions is for Christians to possess and embody a passionate, authentic, and holy love for Jesus Christ. A Christian embracing that intimacy and reality in Christ will not have to be pushed, prodded, or manipulated into sharing his or her faith. The only way to stop such a follower of Christ is to kill them, and that would be gain.”

Chip graduated from the University of North Carolina in Charlotte (B.A.) and Gordon-Conwell Theological Seminary (M.Div.). He pastored for seven years before joining OM.

Chip and his wife, Stellise, have two daughters and three grandchildren. Chip has ministered throughout the United States. Canada, Mexico and Europe, as well as in the Caribbean, Asia, North and South Africa, the Middle East, Australia, New Zealand, Russia, and on board OM's ships, the Doulos and Logos II in various ports throughout the world.

I believe the Scriptures, both the Old and New Testaments in their original texts, are fully inspired by the Holy Spirit, without error, and are the final authority for the Church.

I believe there is one God, eternally existent in three persons, Father, Son and Holy Spirit.

I believe in the absolute deity and full humanity of our Lord Jesus Christ. I believe in His virgin birth, His sinless life, the authenticity of His miracles, His vicarious and atoning death on a cross, His bodily resurrection, His ascension into Heaven, and His present mediatorial work in Heaven.

I believe the Holy Spirit is a divine person sent to dwell in, guide, teach, empower, and comfort the believer, and to convince the world of sin, of righteousness, and of judgment.

I believe that man was originally created sinless. He fell through disobedience, incurring thereby both physical and spiritual death. All men are born with a sinful nature, are separated from the life of God, and can be redeemed only through the atoning work of the Lord Jesus Christ.

I believe that man is saved through repentance and faith in the finished work of Christ. Justification is through grace alone.

I believe that the Church consists of all those who are redeemed through the blood of Jesus Christ and are born again of the Holy Spirit. The present work of the Church is the worship of God, the perfecting of the saints, and the evangelization of the world.

I believe in the personal return of the Lord Jesus Christ to consummate our salvation and establish His Kingdom. There will be a bodily resurrection of the just and of the unjust. The unrepentant and unbelieving will exist forever in conscious torment, and the believer in everlasting joy.

For information on the Dalits:  http://www.dalitnetwork.org/

For information on ministering to persecuted Christians:  https://www.opendoorsusa.org/
Also:   http://www.persecution.com/

For information on Operation Mobilization:  http://www.om.org/

Junior is, well, Junior. Saturated with self-confidence, convinced that everybody adores him, proud of what he regards as his “movie-star good looks,” and antsy to have a good time at the drop of a hat...

When questioned about the benefits of being 102 years old, Eugene replies, “No peer pressure.” Just bringing Eugene out of his suitcase gets instant laughs from any audience he appears in front of...

“If you look up the word loser in the dictionary,” sighs Kelly Sue, “My picture would be next to it.” To say that Kelly Sue doesn’t like herself is the understatement of the year...”